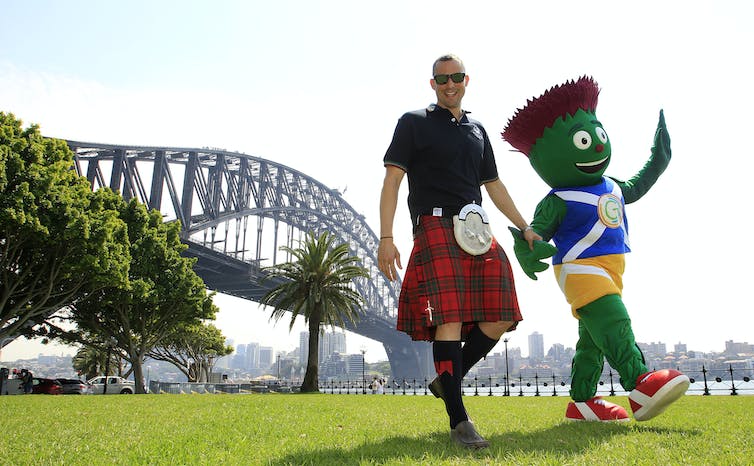 Suzanne Fraser, The University of Melbourne

Since September 2012, the mascot of the Glasgow Commonwealth Games, Clyde the thistle, has been popping in and out of the media radar; greeting children, featuring on merchandise, cheerfully promoting both the competitive forum of the Commonwealth Games and the host city of Glasgow, Scotland.

Named after the river that runs through Glasgow, this mascot takes the form of a he: he is a thistle, he sports a jaunty expression, and he wears a Scottish flag, also known as the St Andrews Cross, as his T-shirt. Designed by Scottish teenager Beth Gilmour and selected by the organisers from a reported 4,000 entries, Clyde the thistle is also remarkable as the first non-animal mascot to be used in Games history.

After the Scottish competitors’ garb was unveiled last week to uproarious derision, the public is no doubt grateful that the Commonwealth organising committee did not select a kilted character as the Glasgow 2014 mascot. Tan, turquoise and fuchsia tartan – perhaps the most disquieting aesthetic melange every attempted:

Still, incorporating subtle cultural nuances into the character of a mascot is a near impossible feat, since the very nature of such anthropomorphised symbols necessitates that they be accessible, abridged assemblages of fitting characteristics.

When applied on a national level, such caricatures – via their symbolism – must allow for an increasingly diverse group of individuals to be able to relate to both it and each other. Writing in 1967, political theorist Michael Walzer summarised the role of imagery in establishing national solidarity in this way, noting:

For several reasons, Scottishness is a more fraught and contentious form of national identity than almost any other in the western world – because Scotland is a stateless nation. Ever since a selected group of Scottish and English negotiators settled on amalgamating their historically warring nations into a single “kingdom” governed from Westminster in 1707, Scotland has existed as one part of a composite state, politically and economically lesser than its founding partner, England.

To compensate for this power disparity, Scotland, since the early 19th century in particular, has asserted a cultural potency separate from that of England. This agenda, of retaining a distinctive and vibrant Scottishness within the British union, has in turn lent the country its kilted identity.

In fact, the majority of tartans worn today are comparatively recent inventions, dating from 1822 onwards. Prior to that, the wearing of tartan was restricted to select Highland regions, colours for the fabrics having been drawn from the pigments of local vegetation. Such were the golden days of non-fuchsia kilts.

Clyde, the Glasgow 2014 mascot, on the other hand, represents Scotland in the form of a plant that is native to the nation’s geographical area. Like tartan, the thistle has come to serve as a distinguishing motif of Scotland, yet its history as a cultural marker far predates the dissemination of tartan as a national dress.

One example of the use of this plant in Scottish cultural identity is seen in the founding, or revival, of the “ancient” Order of the Thistle in 1687 by James VII of Scotland, who was also James II of England. Existing to this day, the chivalric order serves as an expression of a united British establishment, albeit one with a clear Scottish character, since it was founded following the union of the Scottish and English Crowns in 1603.

Earlier this month, the Queen appointed Lord Smith of Kelvin, the Chair of the Glasgow 2014 Committee, to the ranks of the Order of the Thistle. With this appointment, which was announced in the New Year Honours of 2014, Lord Smith, born and educated in Glasgow, became himself a symbol of Scottish participation in the Commonwealth and the former British Empire.

This leads us back to the figure of Clyde the thistle, named after the river that bore so much of Britain’s industrial productivity in the 19th century.

Undoubtedly Scottish national identity is being put to the test in 2014, on a number of fronts. The confluence of hosting the Commonwealth Games, commemorating the 1314 victory at the Battle of Bannockburn, and voting in September on whether Scotland should form an independent state has served as a collective memory prompt, compelling people to consider what Scotland means in a contemporary context.

In the weeks leading up to the launch of the Commonwealth Games on the July 23, commentaries have been divided on whether the global event will bolster the pro-independence voice or fortify the bonds of the British union in the eyes of voters.

Either way, taking into account the imagery of the Glasgow 2014 mascot and the tartan uniform to be worn by Scotland’s competitors, the fictitiousness of contemporary Scottish identity comes across as variously harmless, hilarious and engaging.

A risk only emerges when such symbolism is used as propaganda or as evidence of a historic past that never existed. In such situations, national mythologies become the Sirens’ call of nationalism, luring a hodge-podge band of citizens, otherwise unconnected to each other, away from the calm waters of rational debate and collaboration. Thereby also eschewing the brilliance of competitiveness born of mutual respect.

Of course, national identity can also go awry when it becomes the facilitator of sartorial faux pas. At least Scotland’s young athletes are beautiful enough to look good in anything.

This article is republished from The Conversation under a Creative Commons license. Read the original article.

Thistles and tartan: the fun and Games of Scottish identity

Why Did the Scottish Wear Kilts
Why don’t more men wear skirts?